I didn’t want to start this blog.  I knew it would get me in trouble.  The kind of trouble that puts me in front of a crowd of 200 people from around the world to talk about what it’s like to live with Ankylosing Spondylitis.  I’m in trouble. Big time.

I didn’t want to dive into something bigger than I could handle – something that had the potential to amplify my voice into something like…well, like this conference I’m going to in San Francisco the first weekend in November. I’ve really done it now.

When I was contacted (with help from the Spondylitis Association of America) to see if I would be willing to attend a pharmaceutical company’s conference to speak about living with Ankylosing Spondylitis I said yes without any hesitation.  I said yes to big pharma. I’ll leave the company’s name out of it because I don’t think it’s necessary to mention and also because I don’t want this post to be centered around a brand name but rather around the idea that when we are invited to share our stories on a grand scale, we should.  It’s special.  It’s needed.  It’s absolutely crucial to finding a cure.

Somehow during the past few years I’ve done something to make it on a list of well-spoken, outspoken, knowledgeable, brave advocates. It also terrifies me that I’ve been trusted to share my personal story to reflect the stories of all people suffering from Ankylosing Spondylitis.  All our stories are different.  All our bodies react differently to this disease.  But not all of us feel strong enough, safe enough, comfortable enough, open enough to share our stories. Someone has to do it. I have to do it, at least, that’s what I’ve allowed myself to believe.  So all I have to do is talk about myself. Easy, I do it all the time. Except in the context of this conference I’m also sharing the story of millions of other people suffering from Ankylosing Spondylitis. No pressure.

It is validating to know that my story has

enough impact to catapult me in front of an audience of a couple hundred pharmaceutical employees from around the world. For any drug company to seek the patient’s perspective, to hear what it’s like for those who have the disease, is huge.  It’s ambitious.  And I’m extremely honored and humbled to have been asked to represent my family of AS warriors.

We sickbodies know very well that the drug industry profits off our dependency on their drugs.  There is often a negative undertone when we speak among ourselves about the strain (or bust) on our pocketbooks to somehow afford the drugs we need. Someone is to blame, right? It’s not our fault, but whose is it?  We often throw blame towards the pharmaceutical industry for hyping up the cost of drugs that keep us alive and help slow the progression of our diseases.  I’ve been there. I still complain along with you.  I probably will continue to complain about my dependence on an industry that takes advantage of its consumers that largely have no choice but to find a way to be able to afford their drugs.

But.  Yes, there’s a but. There is another side to this. Drug companies exist to source and provide these drugs, often at a high cost on their end too.  It’s crucial that we patients work with them to remind them who they serve, but also to work with them to figure out these cost issues together.  For a pharmaceutical company to take the drugs and treatments out of the picture for a few moments and ask just what it’s like to be us is a refreshing feeling in a world where we often feel our stories and lives are as invisible as our diagnoses, and where we feel our individuality as patients is marked by checked boxes and lab results: numbers on a page.  It is a reminder that there are companies willing to put aside the profit margin, for a moment, to simply listen to a vulnerable population. It makes us all want to work harder to achieve the end goals: 1) better treatments & 2) a cure. When we’re asked to share our stories, it’s up to us to take advantage of the opportunity to make clear that we are a population deserving respect and equal standing among healthy people.

I also want to point to some very briefly summarized information many of us do not know, whether we are patients or advocates or doctors: what it takes to get a drug, from concept to FDA approval to the shelves in a pharmacy.  I attended a conference earlier this year hosted by the California Partnership for Access to Treatment (CPAT): ‘From Molecule to Miracle; Overview of Drug Discovery and Development Process’ and learned more than I ever wanted to know about how many years, how many proposals, how much money, how much research,  how many tests, how many failures, how many rules and regulations it takes to get a life-saving or life-preserving medication into our hands and in our bodies. The page for the event summarizes it better than I can:

It takes an average of more than 10 years for a medicine to make it from the molecule stage at a lab bench to the medicine cabinet, if it makes it at all. The chance of a new lifesaving drug getting to market is one in 5,000, and of those that make it, only two out of 10 actually pay for themselves.

I don’t have cost information, but you can easily add up the number of years yourself – 10 – and just guess an enormous budget per year. We’re talking salaries, high-cost rare chemicals, lab utilities, equipment, federal oversight and approvals, etc. I am not claiming that drug costs should always remain high, especially after they become more popular and easier to manufacture, and I fully believe the patient should always be the center of any debates on cost and especially affordability. If you’re interested, CPAT is hosting From Molecule to Miracle 2.0 on November 4th, free, in Sacramento, CA. You can register here.

It’s refreshing to know that at this conference all I will be expected to do is talk about myself, not the drugs I take or other treatments. All they want is my story. In fact, it’s been made clear to me that my treatment is not a subject that will be discussed (for ethical reasons, as you can guess). To know that a pharmaceutical company is willing, and wants, to focus on my story as a patient and as a person, makes my heart beat a little more calmly and a little more excitedly. I see doors that seem easier to open all of a sudden. I want to turn this opportunity into a shining light, a glimmer of increased hope, that there will be continued collaboration and support between providers and patients. After this conference, some 200 drug company representatives will walk away with a far greater understanding of what it is like to wake up each day with the reality that there is a disease ravaging my body. They will walk away having listened to my personal journey with Ankylosing Spondylitis and hopefully wanting to continue walking beside us as patients rather than (or in addition to) focusing in a bottom line or a sales quota. For representatives to be able to match a clinical diagnosis to a personal story means they will approach their jobs with more compassion and a greater understanding of those they serve.  They will perhaps realize that if it wasn’t for my disease they may not have their job. My story will affect people from Basal, Switzerland to Beijing, China, to Ho Chi Minh City, Vietnam to San Francisco, CA and beyond.  In a world where Ankylosing Spondylitis is rarely heard of (though it’s NOT rare), where many medical providers think it is nothing more than another Latin name for some silly nuisance (and not a whole-body, unforgiving, irreversible, auto-inflammatory disease), any company brave enough to seek a firsthand account of life with AS means a whole lot – to me personally (because I’m a big deal), to all people who have AS, and to the whole medical community. 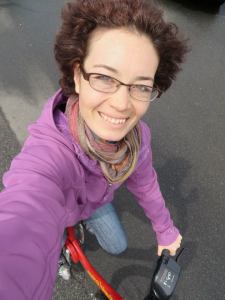 I am proud and humbled by this opportunity to represent those who have Ankylosing Spondylitis and similar diseases.  You KNOW I’ll give my best show.  You know I’ll speak with passion and conviction. You know more people will remember how to say Ankylosing Spondylitis, will want to learn more about it, will want to join in our fight to find a cure.